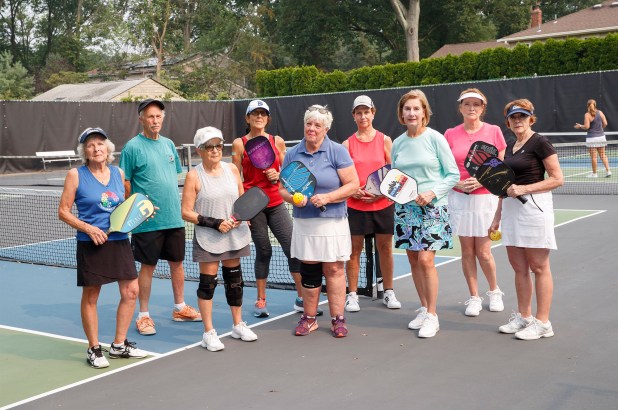 Pickleball is the highlight of many senior citizens’ days in Ridgewood, NJ.Tamara Beckwith

Time to call the mayor.

The game — an easy-on-the body hybrid of badminton and tennis — has become wildly popular with seniors during the pandemic, as it allows for socially distanced physical activity. But the town of Ridgewood, NJ, is in, well, a pickle because of residents complaining about the racket caused by the sound of hard plastic balls hitting paddles.

“The pop-pop-pop sound is unending. It’s noise pollution,” said Judy Mac, who lives steps away from the town’s court. “Absolutely, the court should be shut down.”

The fight’s gotten so heated that police have been called to the courts, located next to Glen School, over noise complaints. Ridgewood’s Village Council has spent $20,000 on sound-blocking fencing, mandated that players use noise-reducing balls and paddles, and put strict controls on hours of play — even adding security to make sure no one breaks the rules.

But that’s not been enough for some whose houses neighbor the court, which was converted from a tennis court in 2019.

It reached the point where Carole Kling invested $38,000 to soundproof her house — adding “hurricane force” windows — to escape the noise from her neighborhood pickleball court.

The din in her home became so severe that Kling “relegated” herself to a single room, opposite the court, where the noise couldn’t penetrate. Finally, though, in November, she gave up and sold the place.

“To say I was upset is putting it mildly,” Kling said, adding that her annoyance is aimed at the village’s recreation department for putting the court so close to residences “arbitrarily and without research.”

But players have little sympathy.

“Pickleball is a gift to us,” Joanne Archer, 74, told The Post. “We’re very respectful.” The Ridgewood resident of more than 40 years plays at least four times a week, weather permitting.

She added that, if she lived next to the court, “because I love [pickleball] so much, of course I wouldn’t be bothered”

“We have made the nicest friends … We just laugh and have fun,” she added of her hobby, which she took up when the courts opened.

Archer pointed out that there’s a house being constructed adjacent to the court as well as several landscapers hacking away each day — yet only pickleball appears to be on the receiving end of the spike from neighbors.

“It is something new that’s piqued our interest and has us moving around,” Archer said. “There’s such camaraderie and it’s such great exercise. That’s why [the complaints are] so shocking.”

Patti Dyrhaug, who began playing the game in September, decided to advocate for pickleball-loving seniors. The 50-year-old and other players stepped up to the net, negotiating with the village for the court’s reopening.The village even shut down the courts from December to March to study the noise problem, which infuriated players.

“You could tell it was really meaningful for them,” Dyrhaug, a youth softball and basketball coach, said of the older players, adding that many have felt isolated during the pandemic.

Last week, despite arguments from the local pickleball community, Mayor Susan Knudsen and the village council voted to keep current restrictions— including a $20 annual fee for what was formerly free access — in place until fall.

(Requests for comment from Knudsen and other village officials were not returned.)

The village did, however, remove the security presence — which has never been used for other recreational spaces and which, Dyrhaug said, left “people feeling insulted.”

The sound specialist hired by the village, meanwhile, measured noise up to a few hundred feet away from the court, but found nothing beyond average suburban hubbub, according to Dyrhaug.

Pickleball fan Archer is upset that the courts are now fully shut Monday and Friday and have restricted hours, as opposed to the former opening hours of 8 a.m. to 8 p.m., seven days a week.

“It’s a kind of discrimination,” Archer said, adding that she prefers to play even earlier in the morning when it’s cooler, something now prevented by the truncated hours.

“It gets so hot; we can’t play in the heat of the day,” she said, advocating for the courts to at least open on Monday and Friday mornings.

“Pickleball is such a joyful sport filled with camaraderie and wonderful people. It brings us so much joy,” she reiterated. “How can they put restrictions on our joy?”