Trusted For More Than 30 Years in Acoustic, Noise & Vibration Consultancy

Dr. Norman Broner, President of the Australian Acoustical Society (2008 – 2010 and 2012 – 2014) and Chairman of the Victoria Division (2010 – 2012 and 2013 – 2015) has had a distinguished career in the field of Acoustics spanning over thirty- five years. One of his particular interests has been in researching the human impact of and annoyance due to Infrasound.  This developed whilst studying at Monash University and resulted in Norm choosing to investigate this further. He completed his Master of Engineering Science at Monash University and then continued his studies at the University of London where he was awarded his Doctorate (PhD) which focussed on his research in Psychoacoustics.

Having completed his studies, Norm returned to Melbourne where he took up a position with VIPAC Engineers and Scientists Ltd. as an Acoustic Consultant culminating in his role as Operations Manager of the Melbourne Office. At Vipac, he consulted in the fields of environmental, industrial, architectural, transport and defence noise and vibration over a twenty seven year period.

During the course of his career, Norman has published many papers and written articles for Acoustics Australia dealing with noise and vibration issues. He has been a member of various International Acoustic Committees including the Technical Committee on Architectural Acoustics (TCAA) of the Acoustical Society of America and has been on the Wind Farms and Humans Reference Group of the NHMRC and international acoustics advisor to the Health Canada’s Wind Turbine Noise and Health Study Expert Committee.

Norm has also been associated with the Australian Acoustical Society (AAS) since the early 1970’s joining the Committee in his student days until he moved to London.

As a long standing Member and Council Member of the AAS, Norm has served as Victoria Division Chairman and President of the Australian Acoustical Society on multiple occasions. He is enthusiastically welcomed by all State Divisions in their hosting Annual Conferences for his style of encouraging exhibitor participation ensuring their financial successes.  Recently he has was also President of the very successful Internoise 2014 INCE Congress run in Melbourne.

Dr. Norman Broner received his elevation to a Fellow of the Australian Acoustical Society (see image below). His contribution to acoustics in Australia is invaluable and his involvement in the Society is legendary. 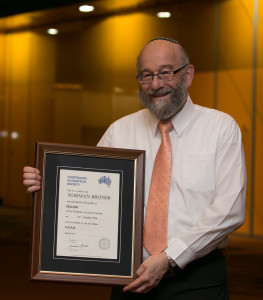 See What Our Clients Are Saying